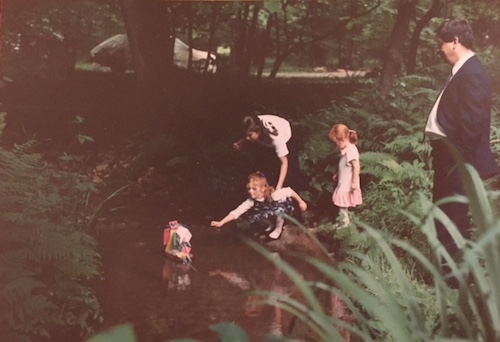 The girls with the boat made for their mother.

Listen to the audio, taking notes if you like. You can also click 'Transcript' to see a transcript of the story.

00:13 Phoebe Judge: One day in the early '70s, David Alexander decided to go for a run in Central Park.

00:21 DA: And so I drove up there and parked the car and walked down in the meadow still holding my key ring, my big key ring. [chuckle] And I wanted to put the – put it down, and there I saw Jessie sitting on a blanket, a Wednesday afternoon in the spring.

00:44 And she had the Times, Sunday Arts and Leisure section, a bottle of water, a sketchpad, and she had a men's hat with a ribbon tipped to one side.

01:26 And I sat down, and then some time went by, and I offered her a ride home, and... which she accepted. It was a different time in New York then. [chuckle]

02:03 DA: Five foot eight, straight posture, at the time had long hair, and green eyes, athletic, and slender. Not really slender, muscular slender. And she had a face that was full of character and was both smart-looking and lovely. And I asked her for a date. I said, "Would you like to go to the ballet?"

02:53 DA: It was the Joffrey Ballet at Lincoln Center.

03:01 PJ: It's easy to tell this part of the story. The rest isn't so simple, nothing good ever is. I'm Phoebe Judge and this is Love.

03:41 And we came in a little bit late, and then I was taking her home and stopped in front of her apartment building, and she said, "Would you like to come up?" "Well, of course." And we were together ever since.

04:23 Julienne: We can't prove that this is what happened.

04:28 Julienne: Also the ease of asking a stranger to hold your keys which you just can't bear to hold in your hand while you go for a run.

04:47 PJ: She had a different upbringing than you did.

04:57 DA: Right away. Well, Jessie and her best friend lived together in this large apartment on the west side of the park. And they would have, during the week, sometimes several dinner parties and salons, as they are known, where someone would be singing while dinner was being prepared. There would be hors d'oeuvres, and there'd be wine flowing, and this, of course, was brand new for me. And there'd be artists, and writers, and some famous and semi-famous people that passed through.

05:55 PJ: And when you met her family for the first time, tell me about that experience? Did you go to the family home?

06:02 DA: Well, I remember having – uh, being invited for dinner. I was on my best behavior, of course. Certainly, I was not her dad's idea of the ideal choice.

06:16 Jody: My grandparents were very traditional. You had to wear specific clothes for different events, and everything was just so...

06:27 Julienne: Jody and I were sent every year the Tiffany's table book of manners because we'd continued to not learn, and then upon our arrival at our grandparents' house, we would be tested and always fail.

06:43 PJ: David and Jessie wanted to make their own kind of life, so they left New York and moved to San Francisco. For money, they opened a lasagna truck. This must have been the first generation of food trucks. They called it Jessica's Moveable Feast. They also started studying eastern religions, transpersonal psychology and Sanskrit. And when they decided to get married, they asked their teacher to perform the ceremony.

07:13 DA: He said sure, he'd be honored. And he set it all up at Golden Gate Park right near the gardens. He created a traditional marriage that we were painted with henna, we had traditional garb on, and my mother and step-dad and Jessie's family came.

07:46 DA: Well, they were... At best, it would have been very, very difficult for them. Bowing to the astrological deities, making offerings of ghee and rice and other things and circumambulating the fire pit. Very, very difficult.

08:12 Jody: There's pictures of them. Dad looks fantastic. He has the largest beard I've ever seen, and mom looks great, also.

08:31 Jody: I think he is wearing a punjabi. My grandparents, they're pictured there, but they sort of look a little bit uncomfortable in the scenario.

08:41 Julienne: Hugely uncomfortable. And they're being asked to, like, pour ghee into a fire ceremony in their, like, white suits.

09:03 Jody: Flowers all over the ground. Both parents in ecstasy and that is captured.

09:21 PJ: David says it was a good life they'd created. A life that seemed natural. One of those lives where you can't really remember anything before. They lived in an ashram, they lived in India, and eventually found an old farm house in the mountains of North Carolina. Wherever they landed, David would set up a studio so Jessie could paint. She would spend hours painting and drawing people and landscapes. Sometimes small paintings she might give you as a gift, and then Jessie was pregnant.

09:55 DA: Jessie never felt that she was going to have children. She was told in a reading actually one time that she'd had that it might be very dangerous for her. And she was very happy to be becoming a mother, totally happy as if something that she never felt was gonna happen within her lifetime...

10:21 PJ: How did having a baby change your relationship as a couple?

10:26 DA: I don't think it did. See, we were older, we had known each other for 12 years, we had our lives in order, and to manage the extra capacity and the newness of it was just wonderful and exciting.

10:51 DA: I remember going to the hospital, and the baby's nurse handed me Jody. She said, "Oh, Mr. Alexander, congratulations. You're a grandfather again."

11:26 DA: It was six months after Jody was born, she had a lump on her breast. It was analyzed, and she was told that she might live for three and a half years on average.

11:55 PJ: For three years, they sought the best care they could find. Then she began treatment at a hospital in Virginia. Two of her friends invited her to live with them.

12:06 DA: As much as she wanted to see the children all the time, she wanted to change the pivot for the girls over to me. And so the children would begin to look to me for all of their needs. We would visit regularly but we did not live together.

12:41 DA: Oh, yeah. I was still thinking she was healing. She held herself together very well, but the illness progressed, and she was unable to get around as well. And it was obvious that it was gonna be soon. And then she called one of our best friends who was a godmother to the girls and asked her to come. And our friend Gabriella came and took charge of the situation.

13:28 I went to sit with her on the last day for her last four hours. She was no longer speaking. And then there was the out breath. It was just a graceful exit.

14:12 Gabriella created for the children a great way to say goodbye to their mother. She asked our friends to gather up some children that they knew in the neighborhood, some families with small children, and we had them over. Her husband built a little boat, a little sailboat about two feet long. Simple.

14:45 Julienne: A little wooden boat that Jody and I were encouraged to fill with little gifts or letters, notes to mom as sort of a send off, and then we took it down to a stream in sort of a parade, mostly adults. Me and Jody in the lead in formal dresses that were very starched. Remember that? And we pushed it off.

15:29 Julienne: All the adults were just weeping and also smiling, and I think we were both pretty confused about what was happening.

15:38 Jody: I only know from the pictures that commemorate. There are pictures from every stage, walking, me holding the boat.

15:49 Jody: And then getting to the edge of the creek that we put it in, and both Julienne and I standing at the edge of the water in those dresses that seemed slightly out of place. Why were we so fancy? [chuckle]

16:09 PJ: They'd stayed in close touch with their friends from the ashram, spending many summers with them in upstate New York. And after Jessie died, David and the girls were invited back there as special guests in order to give them time to get on their feet. They were there for a little over a year, and when it was time to go back into the real world, David took the family back to North Carolina to Chapel Hill.